The other day, I walked into the local theater to watch a showing of Captain Phillips. As I approached the door to Auditorium 4, popcorn and Pepsi in hand, I could hear the trailers still running, complete with epic music and bass-heavy vocals. Whatever was playing sounded pretty good, so I elbowed through the door and stared up at the screen. Except nothing was up there. The screen was blank; the room was pitch black. The audio kept playing, but somebody had glitched the visuals.

This is kind of how our readers feel when we fail to properly describe important aspects of our stories. A few months ago, we talked about how over-explaining can frustrate readers and even insult their intelligence. But, of the two, under-explaining is perhaps the more egregious mistake. Why? Because, like what happened to me with the trailer before Captain Phillips, under-explanation tantalizes readers with the possibilities without giving them enough details to fill in the blanks.

Under-explaining can happen for one of two reasons:

If you’re writing about a character, setting, or activity that you really don’t know that well, you may fail to fill in important blanks simply because you lack the info yourself.

2. The author knows his story too well.

At the other end of the spectrum, we have the problem of our own rampant imaginations running away with us. We see our characters, settings, and situations so clearly in our own minds that we forget readers aren’t sharing that vision. You may know your hero is blond, 6’1”, and about twenty pounds overweight, but that doesn’t mean that information will be automatically brain-waved to your readers.

Sir Nigel burst into the room. He drew his sword and fought with some enemy soldiers. He left through the other door and used his eye patch as a tourniquet for the wound on his shoulder.

As I’m writing this, I’m seeing all kinds of possibilities for Sir Nigel. He looks kind of like Jeff Bridges. He’s wearing armor and tabard straight out of an N.C. Wyeth painting. The room he enters is at the top of a circular stone tower and is furnished only with a wooden trunk and a table and chair. There are about ten enemy soldiers, all wearing chain mail.

That’s a pretty detailed vision. But did you get any of that when you read my original paragraph? You were probably able to draw a couple inferences from the context (this “sir” guy is fighting with a sword, so he’s probably from a medieval setting), but that’s likely about it.

You definitely weren’t sharing the details from my vision for the scene, because I completely failed to present those details. Even the wounded shoulder ended up surprising you, because I didn’t allow you to see the blow that gave him that wound. And the eye patch? Where the heck did the eye patch come from? Sir Nigel started that scene already missing an eye?

Avoiding under-explanation comes down to a few key techniques:

Distribute details throughout the book

Optimally, half of the details we’ve already discussed would have been distributed in other paragraphs. By the time Nigel storms the tower room, readers should already have a general idea of his appearance (the eye patch for sure, if perhaps not the Jeff Bridges comparison).

Nigel probably knows the room he’s about to enter is round and on top of a tower. You can prep readers for what’s to come by keeping them abreast of the narrator’s own knowledge and presumptions.

Show readers what the narrator sees

As soon as Nigel opens that door, he’s going to see the salient features of the room, the number of men inside, and the details that prompt him to believe they’re enemies. What he sees readers should see.

Quite frankly, our fight scene in that paragraph stunk. It wasn’t a fight scene at all, just a bare mention that there was some swordplay going on. You’re not going to need to give readers a blow-by-blow account of everything that happens in your story, but you are going to want to dramatize the exciting and pertinent moments—such as when Nigel is wounded.

We have to find a balance between too much description and not enough. We never want to insult our readers’ intelligence by giving them more info than they need. But we also have to make certain we’re giving them enough details to help them share our visions.

Tell me your opinion: Do you think you are more inclined to under-explain or over-explain? 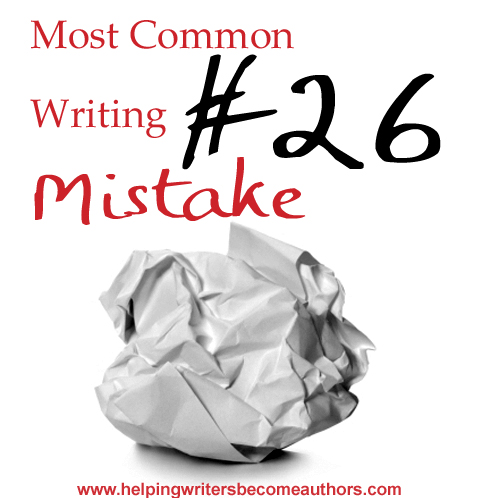