Within the confines of a story, a character can do only three things: he can think, he can talk, and he can move. Out of the three, the first two lend themselves most gracefully to written literature, since words are their very foundation. Movement, although no less important, is a little trickier.

You might think the most difficult aspect of describing character movements would be the descriptive challenges of showing readers exactly what your characters are doing with their bodies. But, actually, the most difficult part is simply remembering to describe those movements in the first place.

Like vanishing settings, less than thorough character choreography can end up leaving readers with either nothing to imagine or, even worse, strangely nonsensical actions in which characters appear to jump from one side of the room to the other or magically end up with a prop in a previously empty hand.

Are You Really Describing Character Movements?

Writers see their stories in perfect Technicolor, right down to the tiniest detail. We see the gold flecks in our heroine’s green eyes. We see the frayed seam in her kid’s sock. We see the expiration date on the milk she’s pouring in his cereal bowl—even before they both gag at its sour smell.

But here’s the sticky part: our readers don’t see all this stuff.

Yes, their own imaginations can and should fill in the blanks. But they can’t paint on the canvas unless we’re giving them the proper paints and brushes. Readers may not need to know about the gold flecks, or the frayed seam, or the expiration date—but they do need to know whenever you character makes an important move. Take a look:

Allie hoisted Jax into his booster seat. They only had ten minutes to eat before she had to be at her job interview.

Jax slapped both hands against the empty tabletop.

Milk, milk, where was the milk? She opened the fridge and slopped milk into the bowl in front of his seat.

By the door, he grabbed Floofy the cat and giggled.

“Get back in your seat and eat your breakfast, right now!”

He stuck out his pink tongue. “Can’t. Smells bad.”

In the windowsill, the cat stopped licking his paw. Even he seemed to wrinkle his nose. Jax was right: the milk did smell suspicious.

How did that bowl end up at Jax’s place at the table? How did Jax end up over by the door with Floofy? How did Floofy end up on the windowsill?

No doubt, smart readers will be able to fill in the blanks and realize that Allie, Jax, and Floofy all moved somewhere in between paragraphs. But they’re not likely to realize that until after they’ve blinked several times in confusion.

It’s one thing to omit unnecessary or blatantly obvious character movements. It’s another thing entirely to create gaping holes in the realism of your story by leaving out causal choreography. Readers will probably realize Jax didn’t just teleport out of his booster seat and Floofy didn’t fly over to the window—but, you gotta admit, that’s what it looks like at first blush.

Let’s try that again. And this time, we’re going to describe every movement that matters.

Allie hoisted Jax into his booster seat and set a bowl and spoon in front of him. They only had ten minutes to eat before she had to be at her job interview.

Jax slapped both hands against the tabletop, then wriggled out of his seat and ran across the kitchen to where Floofy the cat slept behind the door.

Milk, milk, where was the milk? Allie opened the fridge, grabbed the milk, and turned to slop it into Jax’s bowl.

He grabbed Floofy and giggled. Floofy twisted free and leapt onto the windowsill.

“Get back in your seat and eat your breakfast, right now!” Allie said.

He stuck out his pink tongue. “Can’t. Smells bad.”

In the windowsill, the cat stopped licking his paw. Even he seemed to wrinkle his nose. Jax was right: the milk did smell suspicious.

And the veil lifts! Suddenly, with just a little attention to the details, the scene makes twice as much sense.

You’ll note that correctly describing character movements doesn’t necessarily mean you have to describe every single detail. Readers probably don’t need to know that in between putting Jax in the booster seat and opening the fridge, Allie swiped hair out of her face, blinked twice, licked her lips, took exactly two steps, and flicked aside the towel slung in the fridge door handle.

Then again, maybe readers do need to know all that stuff! But those decisions are going to come down to artistic license. Your first and most important task is to simply make sure the scene makes sense. A simple workmanlike scene will beat the pants off an artistically confusing one any day of the week.

Tell me your opinion: Has a critique partner or editor ever suggested you weren’t fully describing character movements? 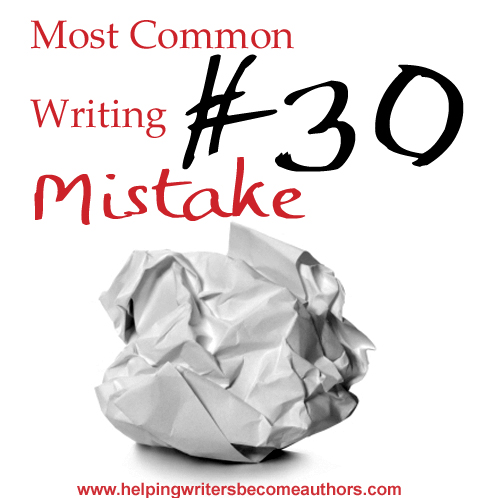