These, days, writers have to be clever. There are so many guidelines we need to observe in order to make our plots, characters, and narratives as vibrant and powerful as possible. As this series on most common writing mistakes attests, there are so many things we try not to do in our writing. The problem is that all this balancing can sometimes cause us to overcompensate in other areas.

For example, one of the first things we often learn is not to “head hop.” Head hopping occurs when a writer violates a tight (or deep) point of view (POV), in which the narrative is being told strictly from the viewpoint and in the voice of a single character. This violation happens when the narrative briefly “hops” into another character’s head, sharing thoughts or perspectives the actual POV character would have no way of knowing. As in:

Luke watched Elizabeth absently twirling her hair as she read the menu. She was thinking about ordering spaghetti again. She frowned, not looking up. She hated the way he was just staring at her, like he was trying to read her thoughts. She was angry at him. No way she was agreeing to a second date.

Unless the previous paragraphs indicated Elizabeth verbally telling the narrator about her desire to slurp noodles and avoid him henceforth, there’s no way Luke could know this. This is out of Luke’s POV. This head hopping. Bad author.

How to Sap the Narrative by Translating Non-POV Characters’ Thoughts

So what’s a savvy author to do instead? That info about Elizabeth’s spaghetti craving and ticked-off mindset seems pretty important to readers’ understanding of the scene and Elizabeth’s character. What we have to do now is cleverly come up with a way to let readers know about Elizabeth’s need for spaghetti without violating POV. Our first reaction might be to have Luke infer and translate Elizabeth’s thoughts:

Luke watched Elizabeth absently twirling her hair as she read the menu. No doubt, she was thinking about ordering spaghetti again. She frowned, not looking up, as if she hated the way he was just staring at her. She probably thought he was trying to read her thoughts. Without question, she was angry at him. Almost certainly, she was promising herself not to go on a second date.

On the technical level, there’s not a thing in the world wrong with this paragraph. No head hopping at all! We’re firmly in Luke’s head from start to finish. He’s only supposing what Elizabeth is thinking while she studies that menu. The author has cleverly used the following words to share Elizabeth’s thoughts without ever breaking POV:

So what’s the problem? Actually, there is no problem–as long as this technique is used cautiously and sparingly. We all make inferences about what other people are thinking based on their expressions, body language, the context of the dialogue and setting, and our intuition. It’s totally realistic that Luke would do the same.

What’s not totally realistic is if Luke is doing more than just guessing Elizabeth’s thoughts. If he’s spot-on in all his suppositions–if the author just happens to be using all these “no doubts” and “as ifs” as a narrative smokescreen to disguise the fact that he really is head hopping–then this technique will inevitably weaken both your narrative as a whole and the narrator’s character development.

The problem is that all this inferring is creating a narrative flow that is based more on tellingthan showing. Instead of allowing the subtext to speak for itself, Luke is offering up his insanely educated beliefs about Elizabeth’s thoughts.

In most instances, readers will be able to guess the other character’s thoughts just as accurately as Luke simply by being shown the same clues as he’s seeing (Elizabeth’s frown, her refusal to make eye contact–especially when paired with the context of the surrounding scene). And the result is a subtle shift to showing the scene rather than simply dumping it into the readers’ lap by telling them everything all at once.

Even better, removing a little of the narrator’s certainty about another character’s thoughts allows you to create a more accurate flow in his ownthoughts–and to create the always interesting possibility that he may be totally wrong.

Luke watched Elizabeth absently twirling her hair as she read the menu. Was she thinking about ordering spaghetti again?

She frowned, not looking up.

Well, he was staring, after all. Maybe that made her uncomfortable. It wasn’t like he could read her thoughts or anything. Not that he’d want to right now, with her being so upset and everything. The chances of her letting him ask for a second date seemed to be dwindling about as fast as their chances of being served in the next five minutes.

We’ve still got some active supposition going on here. Luke is still using words like “maybe” and “seemed.” But the difference is that he’s now working through a realistic mental process, instead of just leaning on a psychic connection with his all-knowing author. And the fun part is that he might be totally wrong about Elizabeth’s mindset, which spikes the potential for intra-personal conflict (because, as the Bible says, “Through presumption comes nothing but strife.”)

3 Reasons You Might Be Committing This Most Common Writing Mistake

Most authors commit this writing mistake for one of the following three reasons:

We’ve already covered this one. Your desire to avoid head hopping is entirely well conceived. But just because allowing the narrator to infer another character’s thoughts is better than head hopping doesn’t mean it’s the best choice.

2. Lack of Trust in the Narrative

The other reason you may be sticking in all those unnecessary “probablys” and “undoubtedlys” is because you’re not certain your contextual narrative is doing a good enough job of conveying the non-POV character’s thoughts.

More often than not, when I go back and reread my narrative and start taking out the “probablys” that have sneaked in, I find my narrative not only doesn’t need them, but that it’s stronger withoutthem. There will always be the occasional instance where this kind of specific reinforcement is necessary. But those moments are fewer than you might think.

3. Belief in the Readers’ Need to Know

Finally, there’s the tempting mindset that says readers need/want to know everything about all the characters. We do after all! But this just ain’t so. Readers love subtext, and subtext can never happen if we’re taking it upon ourselves to spell everything out for them. Sometimes not knowing what the other character is thinking is far more interesting.

On your next edit, make a point to search out the scenes where your narrating character is inferring the other characters’ thoughts and translating them a little too accurately. See if you can spice up your narrative by creating realism and subtext thanks to a subtle rephrasing of your character’s observations and conclusions. 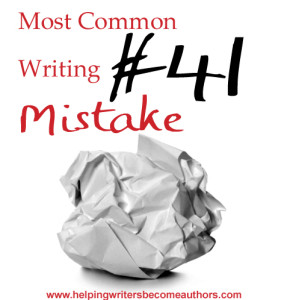