Okay, so it’s not really a trick. It’s a legitimate question with a legitimate, if somewhat surprising, answer. And that answer is: the scene.

Yep, you heard right. The scene—that most integral, most obvious, most universal part of any story—is also the most overlooked and least understood when it comes to the craft of storytelling. 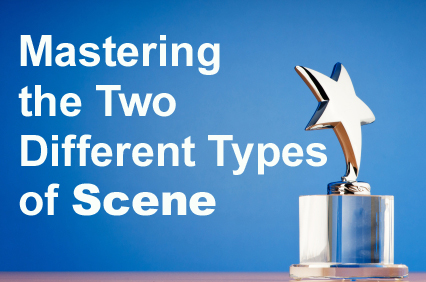 How do you explain the scene?

Everyone has a different answer.

2. A scene is a unit of action that takes place in one setting. (Well, that’s often true, but there are definite exceptions.)

3. A scene is a unit of action that features a specific cast of characters. When that cast changes (i.e., a character enters or leaves the scene), the scene ends. (Not even close. Sure, some scenes begin and end upon the entrance of characters, but others truck right along with a revolving door of supporting characters.)

Before we go any further, I’d like you to take a moment and consider your definition of the scene. And I’m going to bet it’s harder to quantify than you may think, isn’t it?

The two different types of Scene

The problem with most definitions of scene is that they’re, shall we say, vague. And by their very vagueness, they’re not of much help to authors who want to understand this fundamental building block of the story. Over the next twelve Sundays, I’d like to share with you a series about the nitty-gritty of scenes. We’re going to explore some concrete facts. We’re going to learn the basic structure of scenes, variations upon that structure, and how to use an understanding of the scene to pack them one upon another until we have a story that’s rock solid from beginning to end.

To begin with, let me note that we’re going to be focusing on two different types of scenes: scene (action) and sequel (reaction). In my opinion, these are absolutely ridiculous titles that don’t help at all with the misunderstandings surrounding the issue. However, since these are the commonly held terms for the story components we’re going to be talking about, I’ve decided to maintain them. For the purposes of this series, “Scene” with a capital S will refer to the scene in general (which can include in its definition the sequel). I’ll use a small s and italics for scene and sequel when referring to the two different types of Scenes.

As the series progresses, I’ll be breaking down scenes and sequels into smaller pieces so we can analyze what makes them tick. But for now, let’s take look at the big picture.

(Featured in the Structuring Your Novel Workbook.)

What is a scene?

Remember how we talked last week about conflict and tension? The scene is where we find the conflict. This is the action part of the action/reaction dynamic duo. Big stuff happens in scenes. Plot points change the course of the story. Characters act in ways that affect everything that happens afterward. These are the Scenes that will loom large in your stories.

What is a sequel?

The sequel is a much quieter, but just as important, factor in your story. Within the sequel, we find the characters reacting. Usually, there’s not too much outright conflict, but there’s plenty of tension. These are the Scenes in which characters and readers alike are allowed to catch their breath after the wild and gripping events in the previous scenes. Reactions will be processed and decisions will be made so characters can jump right back into the next scene.

As we dive deeper into the exciting world of the Scene, we’ll talk about how to structure the arc of each Scene, how to link all scenes and sequels so they all behave like proper little dominoes, how to use Scene knowledge to spot plot problems, and we’ll even dig down briefly onto the microscopic level of paragraph and sentence structure within the Scene. It’s going to be fun, so hang around!