Structuring Your Scenes, Pt. 11: Variations on the Sequel

Sequels*, even more than scenes, offer all kinds of flexibility. In large part, this flexibility is what can make sequelsdifficult to quantify in stories. Unlike the scene, sequels can be so subtle they blend right into the scenery. This can sometimes lead authors to believe sequels aren’t as important as scenes, but their flexibility in no way eliminates their necessity. For
every scene, there must be a sequel, even if it isn’t immediately recognizable.

To help you realize the possibilities of the sequel, let’s take a look at some of the common variations. 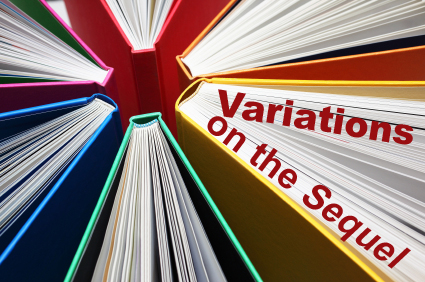 Variations on the Sequel Reaction

The reaction is “ongoing.”

You may find you need to allow your character to react to events as they happen, instead of all at once after the scene. To some extent, characters will always be reacting throughout a scene. If one character throws his milk in another’s face, it won’t make sense for the second character to delay his reaction. If nothing else, his internal narrative will tell readers how he felt about the unasked for milk bath. By the time you reach the sequel proper, you may have already shared the character’s initial reaction with readers. You may choose to develop that reaction further, or you may decide you’ve covered it fully enough and can move right on to the dilemma.

The reaction is delayed.

If the character must overcome his dilemma with a split-second decision, you probably won’t have time to explore his reaction in immediate depth. Let’s say your character is faced by a life-threatening disaster. The baddie shoved him off a cliff, and he’s hanging by his fingernails to a spindly root. Letting him hang there while you spend two pages musing on his terror, hopelessness, and general annoyance at the bad guy’s inconsiderateness is going to bring your story to a screeching halt—not to mention giving that root more than enough time to break. Realistically, your hero is going to have to react to the dilemma and decide on a course of action in a matter of seconds. No problem with that, but you’re always going to want to try to return to the moment later on, in a quieter setting, and record your character’s reaction.

The reaction includes a flashback.

The meditative quality of the flashback means it will be much more at home within the sequel than the scene. The flashback itself, depending on its length, may take on the structure of a scene (goal, conflict, disaster), but because it is a memory of something that happened previously, it will usually fit best within the introspection of the sequel’s reaction phase.

Variations on the Sequel Dilemma and Decision

The decision ends up being a dead end.

The sequel may include “half scenes,” in which the character makes a decision and puts the goal into action, only to have it go nowhere. If you flesh this out, the dead-end goal may take the form of a scene disaster. But if you choose to summarize it, it can serve to lengthen the dilemma/decision section. After regrouping from the dead-end decision, the character will decide upon a new goal and the next scene will progress.

Variations on the Sequel as a Whole

The sequel can take place in a matter of seconds.

If the character’s original goal is foiled by a disaster, he may need to immediately react, take stock of the dilemma, make a new decision, and enact the new goal right away. When the entire sequel takes place on such a short timeline, you won’t have any need to dwell on each of its elements. Make sure the reaction, dilemma, and decision are clear, either explicitly or from the context, then move on.

The sequel can take half a sentence or several chapters.

The length of your sequel will control your story’s pacing. Longer sequels will slow down the pacing and reinforce plausibility. They can go on for chapters, if necessary. Shorter sequels
will keep the scenes’ action rolling and allow the story to move with greater speed. If the logical sequence of events calls for it or if you’re merely trying to amp up your story’s pacing,
you may want to shorten the sequel to a mere sentence or two.

The sequel’s sections can be disproportionate.

Although this series has placed equal emphasis on all three parts of the sequel to allow us to fully study them, the reaction, dilemma, and decision won’t always be given equal weight.
Sometimes you’ll want to spend more time on the reaction, sometimes more on the dilemma. Some dilemmas and decisions will be so clear from the context that you won’t even need to mention them outright. What’s important is that all three sections are there, even if you don’t flesh them out in the text.

The sequel’s sections can be included out of order.

You’re not going to want to do this one very often, but you can mix up the sequel if you need to. Sometimes logic may require you to delay the reaction until after the character has already faced his dilemma. For example, if an elephant stomps on his foot, he’s probably going to act before he can put his reaction into mental words. You’re still including all of the elements within the same section (in contrast to the previously mentioned variation, in which the reaction is moved to an entirely new section), just rearranging them.

The sequel is interrupted by a new scene.

Your character may have returned to base after a disastrous battle. He may be knee deep in his reaction phase—mourning his dead comrades—and just getting ready to face the dilemma figuring out what dirty turncoat leaked the battle plans—when, surprise!, the bad guys launch an attack on the base. Your character suddenly has new priorities and goals. Your reasons for doing this may have been to postpone the dilemma about the turncoat, to ramp up the pacing and stakes, or even to keep readers a little off balance.

Once you have a solid grasp on the elements of the sequel, you’re free to play around with them to your heart’s content. Mix and match, interrupt them with new scenes, smoosh them or stretch them—whatever your story needs. The only solid requirement is that you knowyour character’s reaction, dilemma, and decision within each sequel and that you make those elements clear to readers, either outright or by implication.

So there you have it! You’ve now learned the two parts of the Scene and the three elements that compose those parts—the scene’s goal, conflict, and disaster and the sequel’s reaction, dilemma, and decision. You’ve learned how to build these elements into a solid Scene, which will, in turn, create a solid story. You’ve figured out the variations that will allow you to mold your Scenes to your story’s unique demands. And, in so doing, you’ve gained a deeper understanding of what makes a story work on a technical level. Welcome to the broad new world of conscious Scene structure!